There’s Something About… Altea

Altea is a special place. I’ve said it so many times, I’ve heard it being said so many more. Some people are born here but many, many more find their way here, led to this village on the Mediterranean by unexplained forces. It’s the type of village which should be a top destination in all the guide books. But people keep quiet about it as if there’s some kind of unspoken code of silence. Altea is such a special place that it’s better to keep hush about it lest the masses discover it and fundamentally change what makes it so amazing.

But the people who do somehow stumble upon it – as David and I did five years ago when we were desperately searching for the next step after we lost our jobs in New York, saw that Torrevieja wasn’t working out, and just happened to get off at the tram stop labeled, “Altea” – seem to stay. Kim is a 40 something Norwegian who arrived 20 years ago and is still here. Piero came from Italy intending to stay just for a year… That was 15 years ago. And, since David and I have been here, we have watched many more arrive, become enchanted by what Altea offers and fight to make a home here. Ted sold everything he had in Texas to set up his base here and write a book about his experience walking the Camino de Santiago, Maria chose Altea as her refuge when her husband suddenly announced that he wanted a divorce and she was forced to reinvent herself and her life. Gill, once the owner of a dance school in England, proactively chose to put her health first and moved to Spain for the lifestyle, sun and healthy foods. We each have a story to tell, we’re each on our own personal journey. Somehow we all ended up here in this tiny village on the Mediterranean.

But Altea is not a place that you can just come to. It is a place that you have to be ready for. I have always felt that Altea – because of its small town feel and its oneness with nature – was a place that I was happy in because I had already lived in Paris and New York and arrived to Altea at a point in my life when I was more ready to settle down, when I was more in search of this kind of lifestyle. I always thought that, in this way, this made me ready for Altea.

Until a friend pointed out a different perspective… Altea is a place that you have to be ready for energy-wise.

Google defines energy as, “the strength and vitality of sustained physical or mental activity”. This is a literal definition, and, up until the time I moved to Altea, this was pretty much the scope of my own understanding of the term.

However, after having lived in Altea for five years now, I understand energy in a different way and by a different meaning. Energy can be felt so strongly at times that it is nearly tangible. Some people are more susceptible to feeling energy than others. And energy comes in both positive and negative waves. Energy can be a force that connects us. It can also be a destructive field that separates us.

Altea is full of such an intense energy that sometimes it reverberates with it, and, depending on what you give out, Altea will return to you 10 fold. A guy came in the other night, just as I was contemplating this blog on energy, and announced of his own accord and without any prompting from me that Altea has a bad energy. To my relief, he left minutes later. Out of the blue, this guy who I don’t recall having ever come in before, had come and gone but had left me with his message. I could see it in his eyes when he entered, I could feel it in the energy he emitted. A general dissatisfaction, an eternal searching without the satisfaction of discovery at the other end.

But that hasn’t been my only run in with negative energy. One night, about a year ago, David was on a trip and I was running AlteArte alone. A woman who we have known since nearly the beginning came in saying that she had heard David was gone as if to explain that that was why she was now here. She sat at the bar and sipped her glass of red wine, and, as the night drew on, she became increasingly intense. The last customers left, yet she stayed. Meanwhile, the topics of her conversation grew disturbingly dark. She offered me some of her wine, growing insistent when I refused, finally dropping it after I repeatedly told her that I didn’t drink. And then she told me about how she had cheated on her husband with many men and asked if I was never tempted to do the same. And, as I looked in her eyes, the pupils now dark and dilated, I wondered if I was somehow looking at the devil, so bizarre was the interaction that I was having with this woman who was trying to tempt me with vices and so intense was the negative energy that filled the room. The clock struck 4 am, and I gently prodded her to leave, kindly refusing her ominous offer to wait while I closed so that she could walk me home. With a sigh of relief, I got her out and quickly locked the door behind her, but when I had finished and was leaving, I found her sobbing on the steps leading up to the church. I’ve never had such a disturbing encounter with someone.

Altea is, indeed, a special place, but it can be a prison to some – like the antique seller and furniture restorer who has lived here for 40 years, and is only waiting for retirement so that he can leave. It can be a paradise to others like my friend from Norway who feels like she has found her home here and never wants to leave.

It has been just over five years since we got off at the tram stop labeled, “Altea,” walked along the promenade and then, with enraptured delight, discovered the Old Town. I know now that the reason I was so struck by Altea was because I was ready for Altea. I felt enveloped by its beauty and grace and positive energy, and I felt sure that we had found what we were looking for. And I know now that it’s because we had.

Perhaps people like Ted, Maria, Gill, David and I didn’t haphazardly stumble upon Altea, after all. Perhaps, we were guided here because we were ready for Altea. Perhaps not more is said of Altea not because of an unwritten code of silence but because it’s simply a place that will be found by the right people when the time is right. 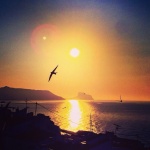 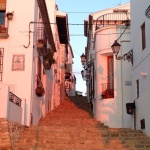 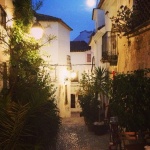 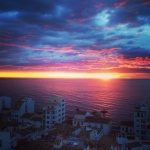 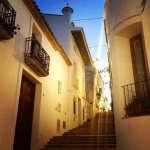 This entry was posted in Uncategorized and tagged Altea, AlteArte, Spain. Bookmark the permalink.

7 responses to “There’s Something About… Altea”